In the third part of our Sorare Scouting feature, SorareHub’s Sam Dunwell turns his attention to the recently added Eredivisie of the Netherlands. He looks at his top 6 Eredivisie Sorare prospects. For transparency, any cards which Sam owns at the time of publication are marked with an asterisk. 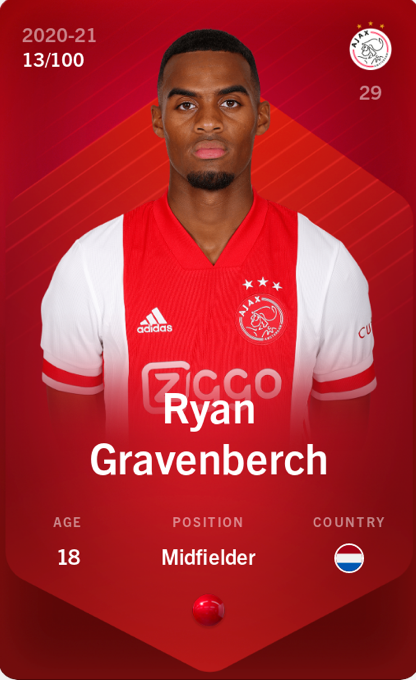 It would be hard to kick off an Eredivisie stars of the future article without leading off with Ryan Gravenberch. One of Europe’s most wanted young midfielders, the 18 year old has already made himself known as a household name at a club which is famed for developing potential.

Gravenberch became the youngest ever Ajax player to play in the Eredivisie at 16 years and 130 days, surpassing the record of 16 years and 242 days set by Clarence Seedorf. Expectations are understandably high for a player who is spoken of in the same breath as other Ajax legends such as Seedorf, Edgar Davids and Ronald de Boer.

An ever present starter already, Gravenberch scores highly on the S05 matrix and continues to impress with a pass completion rate which rarely drops below 90%, an average of five duels won per game and the ability to create big chances for others. Barring serious injury, this is a player who is surely destined for the very highest level. 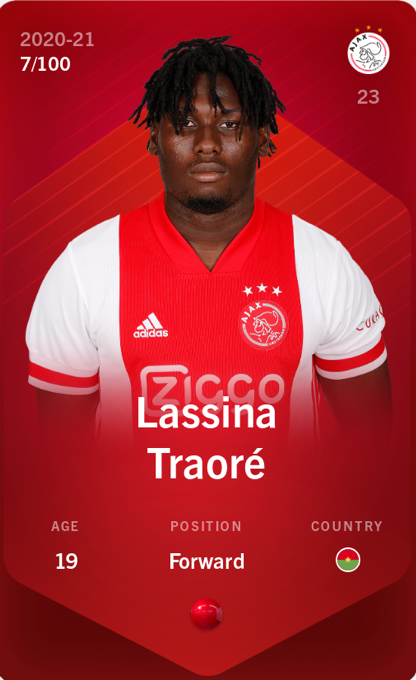 Staying at Ajax, we turn our attention to Lassia Traore, the 19 year old striker from Bukino Faso. Highly athletic and physically imposing, it would be easy to assume that Traore is a classic ‘target man’ striker expecting to feed off high crosses or holding the ball up for others around him. This couldn’t be further from the truth. For a player of his age, Traore appears to be extremely technically gifted with the ability to come deep and create chances for others as well as a poacher’s instinct for scoring goals.

Traore has an unusually high xG of 0.24 per shot, Traore’s goal output is on a par with some of Europe’s most established forwards. Whilst all of this may sound too good to be true, there is one significant catch to be aware of. Traore is simply not getting games right now, since the arrival of Sebastien Haller from West Ham. The future remains bright for Traore who should find opportunities again at Ajax or from one of the many suitors who had been vying to sign him during the 2021 January transfer window. Whilst there may be limited immediate utility from a Traore card, this is a player whose time will surely come. 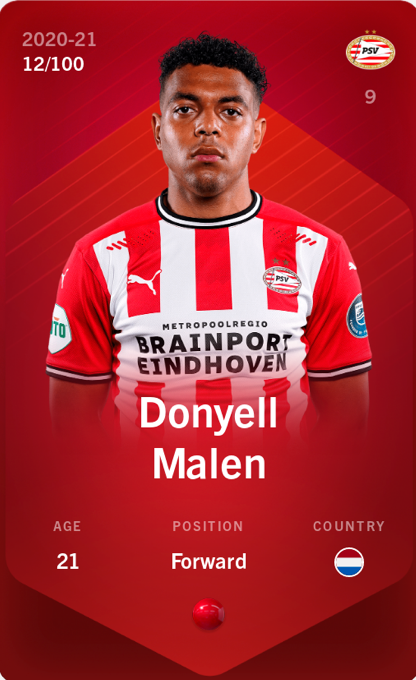 We step away from Ajax and head to rivals PSV to showcase the talent of young winger Donyell Malen. The former Ajax and Arsenal youth teamer arrived at PSV with a lot to prove but has certainly announced himself as one of the Eredivisie’s brightest talents, with six caps and a goal for the Netherlands national side. Operating from the left wing with electric pace and a change of gear to leave an opponent behind,

Malen continues to refine his game with improved technical ability and decision making. At 22 years of age, he should still be regarded as sufficiently below peak and can go on from here to dominate Challenger Europe or become a most valuable addition to the Champion Europe ranks. Borussia Dortmund are expected to move for Malen should Jadon Sancho finally complete his return to England and Italian giants Juventus are also said to be eyeing up a move for the youngster. Wherever he ends up playing his football next season, Donyell Malen is clearly a player whose stock is on the rise. 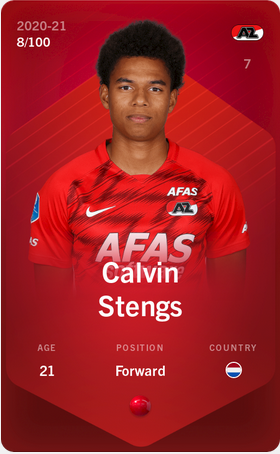 From Ajax to PSV to AZ Alkmaar, our tour of the lowlands continues to gather momentum. If we’re heading to AZ then the next name on our list simply has to be that of Calvin Stengs, the 22 year old right sided forward who continues to grow and impress with every game. A product of the AZ youth academy, Stengs has learned his trade alongside his current teammates and demonstrates a deep rooted understanding of the way his side are set up to play the game.

A relatively late bloomer amongst Dutch ‘wonderkids’ Stengs was 19 by the time he broke into the AZ first team but his rise has been nothing short of meteoric since. With five caps already for the Dutch national side, Stengs is already playing at the top level and is regularly showing why Barcelona continue to be interested in bringing the player to Camp Nou. 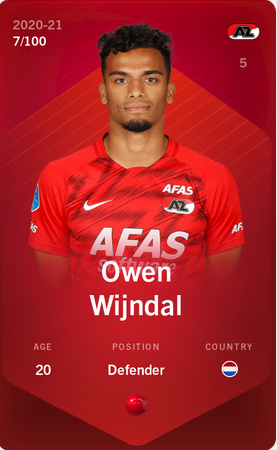 Staying at AZ we move from front to back with a look at Owen Wijndal, the 21 year old full back who is making a huge impression on the Eredivisie. A modern left back who likes to get forward wherever possible, Wijndal has been a hugely effective player for a young AZ side with a reputation for generating talent. A solid technical footballer with a high ball retention rate, Wijndal rarely misplaces a pass and is adept at recycling possession amongst the more creative players around him in the starting third of the pitch.

For a side which likes to play out from the back like AZ Alkmaar, this is a real asset which also contributes to high SO5 scores for Wijndal as well. Whilst this may sound solid but unspectacular, it’s the defender’s ability to make an impact at the other end which really catches the eye. Regularly making the overlapping run on the left flank, Wijndal’s presence in the final third is hugely effectively as an overloading attacking threat when AZ are in possession. From a Sorare perspective, Wijndal is an alluring option due to his ability to hit high peak scores for a defender.

Prospective owners needs to accept some of the players limitations and the reality that for every score above 65, there will be a handful of more average scores in the 40s and 50s. This is to be expected for a player still learning his game in playing in a good but not outstanding Eredivisie side. At still only 21 though, the potential for growth with this player is exceptional and should make the shortlist of any collector scouring for young talent amongst the Dutch sides. 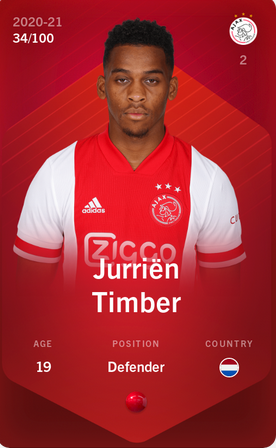 Unsurprisingly, we end up back at Ajax for our final pick of this SorareHub Scouting Centre installment. Jurrien Timber may be one of the less well known graduates of the Ajax Academy but a recent breakthrough into the first team has been a great opportunity to showcase the player’s quality.

Primarily playing as a centre back, Jurrien is the twin brother of Quinten Timber who also features for the Ajax Under-23 side. At just 19 years of age, the two players have already been earmarked as players of outstanding potential in both defensive and midfield positions respectively.

Whilst it may be too early to compare the two brothers to the last set of famous Ajax twins, it’s no surprise to hear the Timbers spoken of in the same breath as the De Boers. Jurrien has made 11 Eredivisie appearances for Ajax this season with five SO5 scores of 50 or greater, four of which have fallen in the 60s and 70s. Extremely comfortable with the ball at feet and with an incredibly athletic turn of pace, the defender is able to mitigate his 5ft 9in height at the centre back position. Jurrien Timber has already been tipped as a future star of the Dutch national side at either centre or full back and with many years of development ahead the player’s potential is almost limitless.

If you are new to Sorare then why don’t you try our beginners guide which you can find here.

PrevPreviousTop 7 MLS Sorare Prospects – Stars Of The Future MLS Edition
NextThe 5 Best Galatasaray Sorare Signings for your CollectionNext
Shopping Basket
We use cookies on our website to give you the most relevant experience by remembering your preferences and repeat visits. By clicking “Accept”, you consent to the use of ALL the cookies.
Cookie settingsACCEPT
Manage consent