In today’s edition of the SorareHub Scouting Centre we turn our attention to Major League Soccer. MLS is one of the SO5 leagues which is growing in interest rapidly. Resident writer Sam Dunwell casts his eye over his top 7 MLS Sorare prospects. For full transparency, the cards which Sam already owns at time of publication are marked with an asterisk.

Have You Signed Up To Sorare Yet?

Have you signed up to Sorare yet? if not why don’t you sign up using our referral link by clicking the image below, you will get a free rare card after you make 5 purchases at auction. If you are looking to get into Sorare for the first time then find our beginners guide here 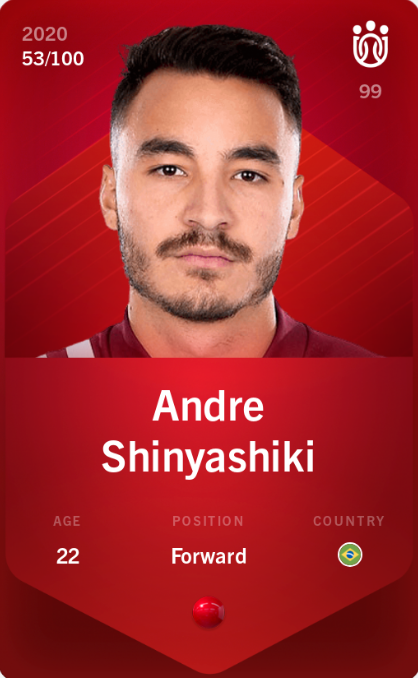 We start with the 2019 MLS Rookie of the year, Brazilian forward Andre Shinyashiki. He racked up seven goals and three assists across 31 appearances (18 starts) in his rookie campaign. The diminutive forward surpassed what were already high expectations in his first full season of Major League play.

A prolific scorer in the Men’s College system, Shinyashiki earned himself a deserved reputation as a natural finisher. He has the ability to get himself in the right position to take advantage of goalscoring opportunities. Despite the disrupted MLS season, the 5th round pick of the 2019 SuperDraft continued his success in 2020; starting 14 of Colorado’s 19 matches, including the Rapids’ first-round playoff loss.

Shinyashiki scored four goals and added one assist in the last eight matches of the 2020 regular season, reminding fans of his quality in the final third. 2021 is a big season for Shinyashiki who now needs to demonstrate the required consistency over the course of an uninterrupted regular season. 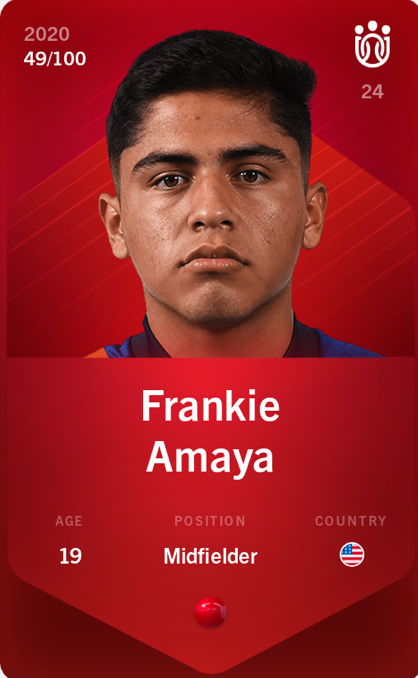 Staying with the Class of 2019, we turn to the Number One pick from that year’s draft, Frankie Amaya. Picked up by expansion side FC Cinicinnati, the pint-sized Californian has already established himself as a first team regular at club and youth international level.

At the end of 2020 Amaya was called up for the US Men’s National Senior Team. This just shows how highly he is rated by Head Coach Gregg Berhalter. An ever present in the FC Cincinnati side during 2020; Amaya has all the tools to be a leading scorer in the SO5 Champion America divisions. Playing in a side which averages fewer than 1 point per game over the last two seasons, there is no doubt that the midfielder is unable to fully shine whilst constrained by Jap Staam’s team.

Better days lie ahead however with Amaya widely expected to move to another MLS side; seemingly as soon as the start of the 2021 season. With the right players around him, this is a player for whom the sky is very much the limit. 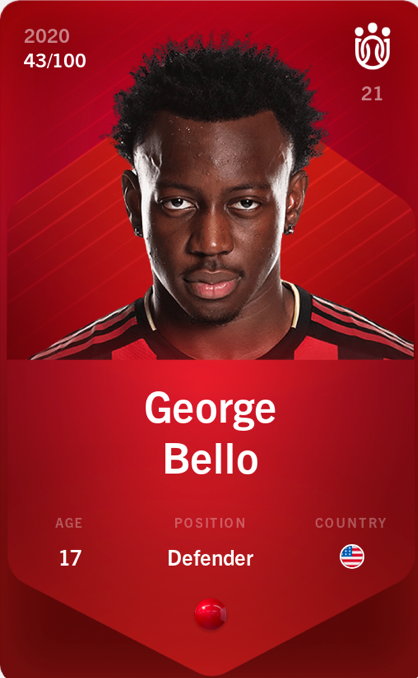 At just 19 years of age, it seems that George Bello has the world at his feet. Born in Abuja, Nigeria, Bello has worked his way through the Academy structure at Atlanta Utd. He is now a first team regular having previously played youth level football with the Southern Soccer Academy. On 1st February 2021 the marauding left back earned his first cap for the USMNT; playing the final 26 minutes of the friendly against Trinidad and Tobago.

For a player who had only turned 19 in the previous week, Bello’s meteoric rise to the top table of Major League Soccer isn’t without issues. In two seasons disrupted by injury, legitimate questions have been asked over Bello’s defensive abilities; most notably his concentration and positioning.

For a player who likes to get forward wherever possible, it isn’t unusual to see the Atlanta left hand side exposed and wide open to the counter attack from opposition sides. Despite this, outstanding athletic talent often allows Bello to demonstrate is remarkable recovery pace with an ability to match most forwards in a foot race. In the seasons ahead there is no doubt that George Bello needs to stay fit; also to work on his defensive game and continue his progression at an international level. If he can do this whilst retaining his athleticism and attacking output then he will surely be regarded as one of the best modern full backs in the game. 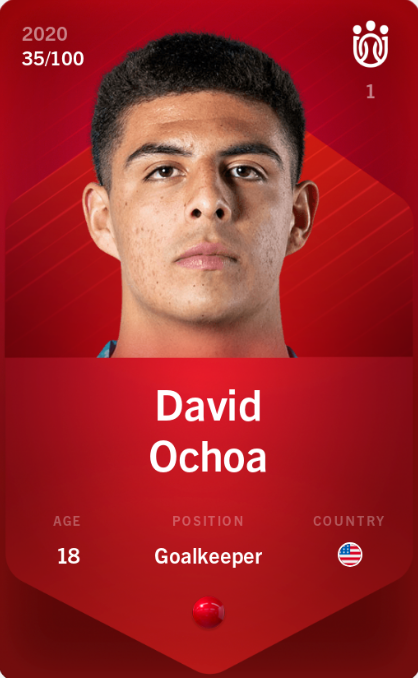 Perhaps a name not entirely familiar with football fans outside of the United States; David Ochoa has been the ‘heir apparent’ starting goalkeeper at Real Salt Lake City for some time now. In August 2018 it was reported that Ochoa was training with Manchester United, with trials planned at other major European clubs.

Ochoa now finds himself knocking on the door of the Starting XI at RSL following a debut appearance in November 2020. Eligible to play for both Mexico and the United States; the young goalkeeper has elected to represent the latter at multiple youth levels. In March 2021 he was retained on the final roster for the Olympic Qualifying Tournament in Guadalajara, Mexico. Ochoa will be keen to make an impression at the tournament; it’s widely expected there will be mass rotation so he should get an opportunity.

A chance to shine will surely come sooner rather than later for a shot stopper who was called up to the senior USMNT at the end of 2020; only to see the opportunity disappear due to a minor quadricep injury. It’s not yet known whether Ochoa will cement the starting berth for RSL in 2021. This is a goalkeeping talent who is clearly extremely highly thought of and will undoubtedly get his chance in time. 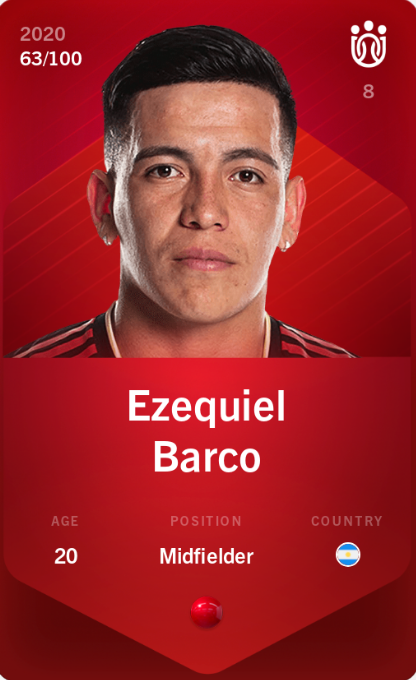 You wouldn’t expect to find a player who cost a record $15m as an 18 year old featuring in a guide to “up and coming” MLS youngsters. Yet, despite the price tag Barco (about to turn 21) is a player barely known beyond the MLS scene. A teenage sensation in his native Argentina, Atlanta United fans had much to be excited about the winger’s arrival to their side. Yet, going into 2021, it’s widely regarded that this will be the most important season of the player’s fledgling career.

Ezequiel Barco, once regarded as the outstanding talent of the Argentina youth development programme and tipped to become a global star; he arrives into the new season facing a make or break moment. To date, Barco has shown only flashes of the quality which made him such an exciting talent prior to his move. Not helped by regular international call-ups during the MLS season or the occasional injury, Barco has yet to live up to the hype.

Whilst the dreams of a big move to Europe seem to be fading; he wouldn’t be the first or last South American who has struggled to adapt to playing in a new league. There is still time to turn this story around and the arrival of fellow countryman Gabriel Heinze into the Head Coach role at Atlanta Utd must surely be a tremendous positive. If 2021 is to be Barco’s year then surely anything is possible again for the youngster who certainly has a lot to prove. 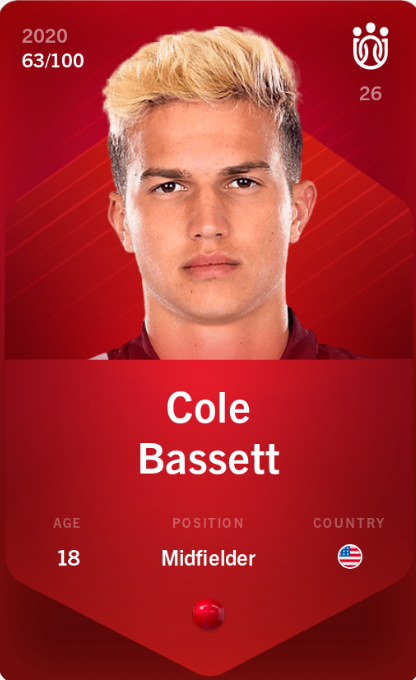 We go back to Colorado now for a player who enjoyed an impressive breakout season in the 2020 MLS campaign. Cole Bassett is a name which will be recognisable to most MLS fans; as a player who has been in the league since 2018. In 2019, Bassett was named in the “22 under 22” rankings for MLS youth players; his career has been progressing on a nice trajectory. The unusual 2020 season however gave Bassett a great chance to shine and he took the opportunity with both hands. The 19 year old is developing into something of a cult figure for local supporters. Bassett has also earned MLS Team of the Week honors on three separate occasions last season.

The midfielder ended the season with five goals, five assists; also having the second-highest big chance conversion rate in the league. At the club’s annual end-of-year awards gala, Bassett was named the Players’ Player of the Year, Young Player of the Year and Team MVP Colorado Rapids’ supporters. At just 19, there may be much more still to come. 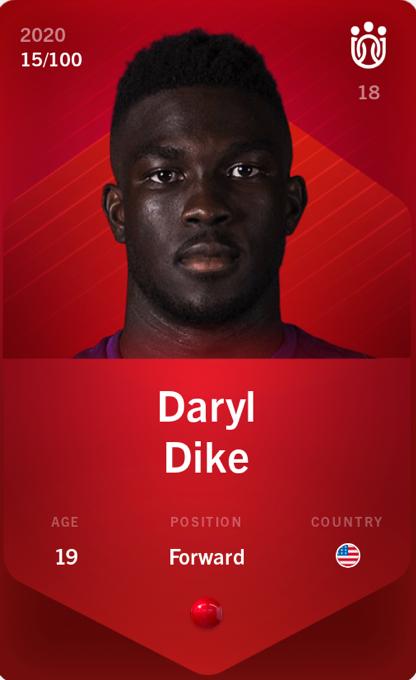 We finish with a forward who had a 2020 he won’t forget quickly. Arguably the best rookie in MLS last season, the physically imposing centre forward broke into the Orlando City first team during August 2020 and made the position his own thanks to a number of high quality performances.

Dike’s athleticism is what often makes the most striking impression; but it’s his finesse in both finishing chances and all around play that make him such a desirable prospect. Dike will have had a full pre-season thanks to a loan spell at Barnsley. Dike will return to Orlando City when the MLS season starts in April ready to hit the ground running. He has a $20m release clause in his current contract. It would be no surprise to see him head to Europe during 2022 after concrete interest from leading clubs in England and Italy.

If you are new to Sorare then why don’t you try our beginners guide which you can find here.

PrevPreviousSorare French Talent – Future Proofing Your Gallery
NextTop 6 Eredivisie Sorare Prospects – Sorare Stars of the FutureNext
Shopping Basket
We use cookies on our website to give you the most relevant experience by remembering your preferences and repeat visits. By clicking “Accept”, you consent to the use of ALL the cookies.
Cookie settingsACCEPT
Manage consent