Welcome to the first edition of a series of articles profiling the most exciting emerging talent from the many leagues covered by Sorare’s SO5. This week, we’re delighted to feature guest writer @FiGenesis – Twitter’s resident French football talent scout. France has always been a hotbed of football talent, you only have to look at the depth of the national team to see that. If you are looking to build a team for now or for the future, France is always a good place to start.

I won’t start with the most obvious pick, while Boubacar Kamara tends to get most of the Twitter Scouts’ attention in the Marseille midfield, Pape Gueye has also quietly been having a very encouraging debut season in the top flight. Having seemingly joined Watford last Summer, Gueye then flipped his decision and agreed to join Marseille at the last minute. He is now starts every week keeping Val Rongier out of the team, Gueye has become a real box to box midfield force.

The glory of the Sorare matrix is the rewarding of defensive and offensive decisive moments. Gueye is not shy of a shot at goal and also has the ability to also contribute big moments in defence. I expect him to remain a core player under Jorge Sampaoli. 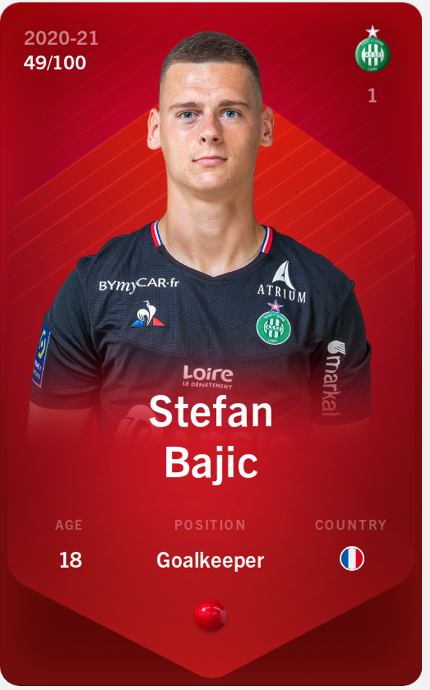 Good goalkeepers are currently like Hens’ teeth on Sorare. Even as more clubs are loaded on, the position will remain the most scarce on the platform. This means that starting Keepers can seem eye wateringly expensive. Thus, many users would be best advised to seek out the potential goalkeeping gems of tomorrow.

Stefan Bajic is one of these, and his time to shine may come sooner than you’d think. Bajic is next in line at St Etienne, current first choice keeper Jessie Moulin, is already making noises about moving to the MLS. He has also not really shone between the sticks this season.

All Football Manager players amongst us will know that he’s been an almost hidden wonderkid in the game. Football Manager researchers know their stuff and so it’s no surprise that Bajic is very highly regarded both locally at ASSE but also nationally around France. If Moulin does cling on for one more season then expect interest in Bajic to be high for a loan move.

Have You Signed Up Yet?

Have you signed up to Sorare yet? Click the image below to use our referral link and sign up to the next generation in fantasy football. You will get a free rare card when you make 5 purchases from auction. 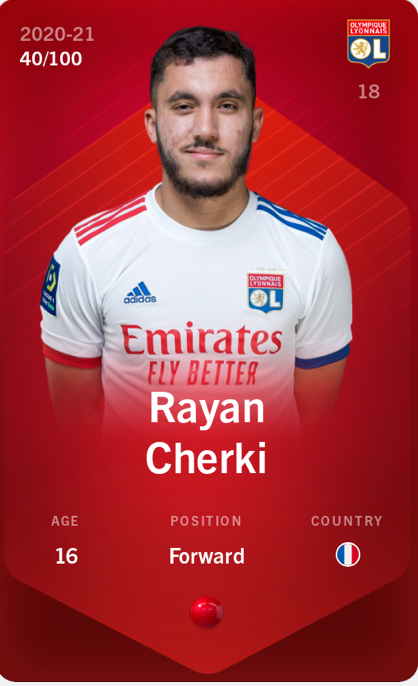 An obvious one. And an increasingly expensive one. His price on Sorare has risen dramatically recently. Even more so off the back of yet another impressive cup performance at the weekend. Yet, there is a lot to be said for investing in Rayan Cherki now if you have the capital.

Personally, and I apologise as I keep saying it, I have never been so convinced by a young French player. I spend my days watching and researching French football. Cherki is off the charts in terms of potential, completely two footed, strong for his age with explosive pace over the first few yards.

His technique is exceptional as is his reading of the game for his age. Don’t forget he’s only just turned 17. Indeed his rookie card on the platform was first minted when he was 15! Next season should be the break out season. If it is then he’ll be an SO5 superstar and a true collectible asset for years and years to come. A comparison? Think Eden Hazard at Lille but with a far superior mentality.

Back down from the high altitude of the Cherki-sphere and to St Etienne again. This time in search of a value pick. Zaydou Youssouf, a bit like Gueye at Marseille, doesn’t tend to get much attention these days. However, rewind two years and the story was very different. Zaydou was hot stuff, one of the next big Ligue 1 midfield prospects.

Sadly though an ACL rupture wrote off all of last season just as it looked like he would break out. This season has been a comeback one, whilst he’s not been a regular, as manager Claude Puel has juggled his pack to stall the slide towards the bottom of Ligue 1. Youssouf has looked good in the game time he has received.

An attack minded central midfielder with good ball carrying, he also loves a long aerial ball and is also a dead ball specialist. His price has not seen the rockets of other young stars. If St Etienne stay up, then we could see those rockets engaged next season. 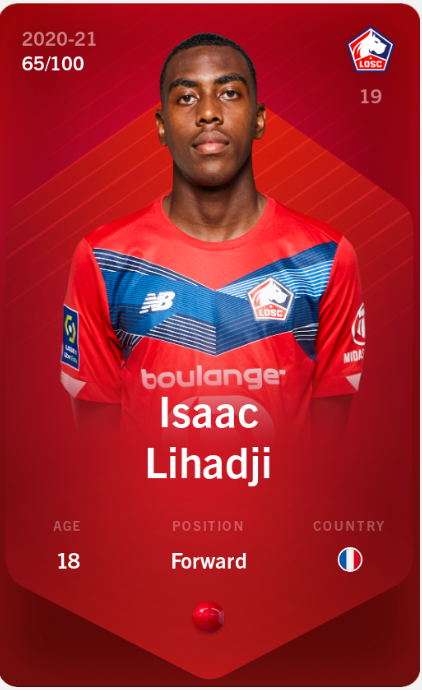 Isaac Lihadji has been inked for the top since he was 12 years old. A move to Barcelona’s fabled La Masia was scuppered by a broken leg when he was 14. Nonetheless, he broke into the Marseille first team under Andre Villas Boas aged 17 last season. All signs pointed to him finally fulfilling his huge potential. However, a dispute over signing pro terms saw him relegated to the reserves.

That dispute ultimately saw him leave Marseille on a free and move to Lille last Summer. Since then he’s had to be patient. He can play on either wing or as a centre forward. That has put him behind the likes of Bamba, Ikone, Weah, David and Yilmaz in the pecking order at Les Dogues. But he’s at a great club for youth development. He is a skilled dribbler and a constant goal threat through assists or scoring himself.

Thit bodes well for his SO5 scoring when he eventually makes the breakthrough. If Lille continue to face financial issues and are forced to sell again this Summer then the route to the first XI may well become a great deal clearer for Lihadji in 21-22. 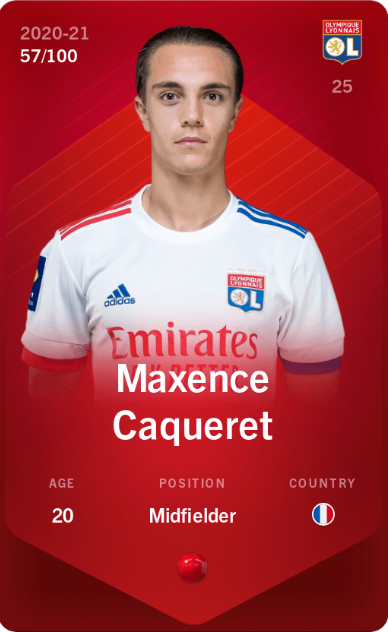 Prepare yourselves because Maxence Caqueret will soon be a regular at Lyon, a future club captain in my view, and he’s like Mahdi Camara on heat. Caqueret is technically superb and already possesses superb vision for his age. He’s not a huge goal threat as he tends to play deep but his potential to provide assists plus his unbelievable defensive contribution (he’s absolutely relentless in defense) means he could become a real SO5 star of the coming seasons. With departures expected at Lyon this Summer and already on the fringes of the first eleven, 21-22 could be the season we recall as the one that Caqueret announced himself properly to the world. 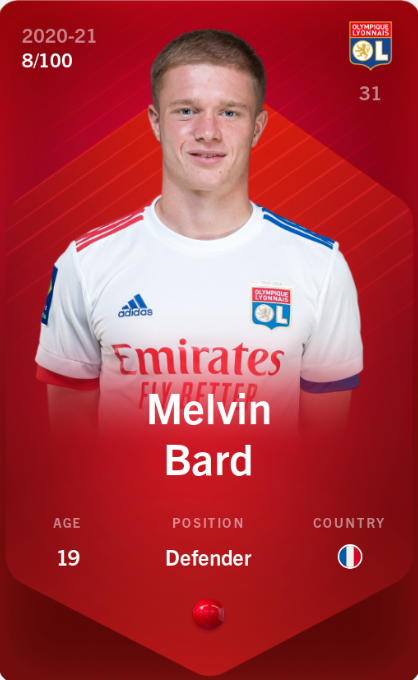 Full of attacking verve, he gets in positions to affect the game in offensive areas often. Plus he’s got a tight knit relationship with Cherki and Caqueret. They could well become a genuinely world class trinity for Lyon. What to expect from Bard will still depend a lot on what the club does with Maxwell Cornet. They tried to sell him last summer. Yet, he’s filled in at left back admirably if not altogether effectively. Keep an eye on that one developing. Bard’s price seems to remain a little suppressed. Strike now or miss the rise! 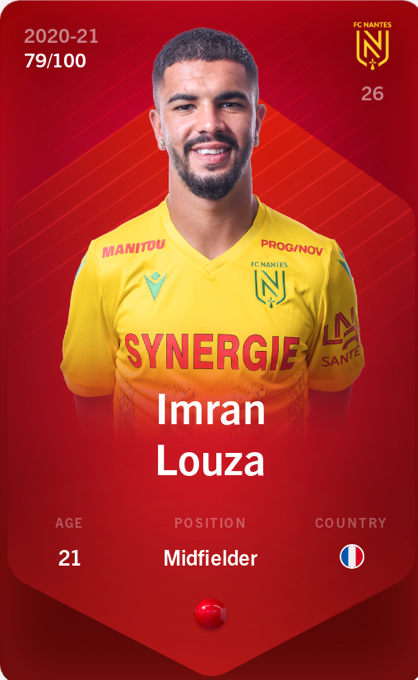 Imran Louza is flying under the radar a bit at the moment. He’s playing for an unfashionable club In the shape of Nantes and is somewhat in the shadow of teammate Ludovic Blas.  However, don’t for one minute think that Louza is not one to watch, he absolutely is. Both a set piece and penalty taker means that his chances of being ‘decisive’ are already enhanced. Plus, he’s been played as a trequartista or as an inside forward a lot this season. Playing that far forward he’s always going to have a chance of impacting the game.

While not athletically explosive, his passing and ability to get into space are advanced for his years. He specializes in arriving late in the box too. Louza attracted major interest from both Marseille and AC Milan earlier in the season. Lyon are also said to be monitoring his situation. Even if Nantes go down this season, I am as confident as I can be that Louza will remain in Ligue 1 or another top 5 league in season 21-22.

That is all from FI Genesis click his name to give him a follow on twitter so you can keep right up to date with all things French Football. If you are new to Sorare then why don’t you try our beginners guide which you can find here.

NextTop 7 MLS Sorare Prospects – Stars Of The Future MLS EditionNext
Shopping Basket
We use cookies on our website to give you the most relevant experience by remembering your preferences and repeat visits. By clicking “Accept”, you consent to the use of ALL the cookies.
Cookie settingsACCEPT
Manage consent